Our website uses cookies so that we can provide a better service. Continue to use the site as normal if you're happy with this, or find out how to manage cookies.
X
You are here
>Filming and Promotions on the Thames

Filming and Promotions on the Thames

Filming and photography on the Thames 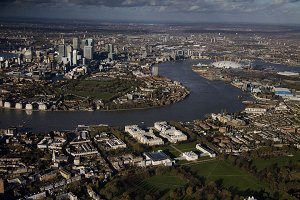 The Thames provides a fantastic backdrop for film and TV programme makers and has featured in many iconic moments in movies, from Harry Potter films through to James Bond's 'The World is not Enough'.

The tidal Thames - which stretches some 95 miles from the sea through the heart of the capital and as far west as Teddington - gives location managers a rich diversity of possible locations. This includes the marshes and wide expanses of sea in the Thames Estuary; iconic and historic buildings and a busy river in central London; and on to the more tranquil river and towpaths of west London. Most days of the year there is a tv drama, documentary, film, advert or commercial video being filmed somewhere on the tidal Thames.

At the PLA we can help guide you through securing the necessary PLA licence for filming on the Thames and also offer other advice as you develop your plans for filming on the river. The licence, and supporting advice, help ensure that filming on the river is conducted safely and does not interfere with operations on this busy tidal highway for passenger, tourist, freight and leisure movements. The standard charge for a tidal Thames filming licence is set out in the PLA Charges Schedule.

All filming activity (and all commercial still photography) on the tidal Thames requires a filming licence. This includes ALL filming involving boats and vessels and filming on piers and other structures in the River. We can also advise on the possibilities for safe filming activity on the Thames foreshore (ie the part of the river exposed at low tide).

For more information about filming on the tidal Thames please contact Martin Garside in the Corporate Affairs team on 01474 562 366 or email.

The tidal Thames is periodically used for a range of events from public awareness raising to commercial product launches.  All such events have to be discussed and agreed with the PLA.  This ensures they can be safely integrated into the day to day business on the UK’s busiest inland waterway for passengers and freight.  Anyone looking to arrange such an event must get in touch with us at the earliest opportunity and at least six weeks before the date of the event being considered.

Fees for events on the river are by agreement with the PLA Corporate Affairs team.  Fee discussions for activities lasting less than one day are around a series of three bands as set out in the PLA Charges Schedule.

The tidal Thames is the busiest inland waterway in the UK.  At all times of the day and night this busy river is used by a wide variety of boats and larger vessels – from small recreational craft through to passenger boats and larger cargo and freight vessels. And London’s bridges, embankment areas and piers are popular areas for pedestrians from tourists and visitors to the wider general public.

Unregulated and careless drone use carries many potential hazards – ranging from risk of injury to passengers / crew on boats through to collision with oncoming vessels. There are also hazards to users of London’s busy bridges and passenger piers.

Consequently, the river is not a safe place for the routine use of any type of low flying aircraft – manned or unmanned. In particular the Thames cannot be regarded as a convenient ‘corridor’ or ‘space’ for drone flying.

However, there are occasions when professional film makers request use of a drone to film a particular scene. In such instances, the request will be considered carefully, taking into account the following:

1. whether the applicant has carefully considered the potential hazards

2. whether the scene can be achieved without a drone, therefore avoiding disruption and potential hazard to river operations, eg by:

• filming from a boat on the river

In the event a drone is considered, this will be subject to the following requirements:

1. A minimum of four weeks notice of must be provided

2. The application should include:

• proposed time and duration of filming

3. Applicant will also need to secure the following written consents for the specific date and location

• If appropriate, a PLA Notice to Mariners will be issued and river traffic controlled by the PLA for the duration of any filming. The costs of both these activities must be borne in full by the film maker

• It is a basic requirement that the drone maintains a minimum of at least 50 metres from any person; vessel; bridge; pier; or other structure

As with all filming and photography on the tidal Thames, a filming licence fee is also payable to the PLA. The fee must be agreed in advance with the PLA and settled in advance of the licence being issued.

Filming at Richmond Lock and Weir

The Port of London Authority (PLA) owns and operates Richmond Footbridge, Lock and Weir, situated between Teddington and Richmond, which offers a wonderful location for any type of film and television productions as well as still photography.

The structure was officially opened by the Duke and Duchess of York in 1894 and is a listed Victorian structure.  The PLA completed a major, £4million refurbishment of the lock and weir in the early 1990s to take it back to its former glory.

The weir comprises three vertical steel sluice gates suspended from a footbridge. For around two hours each side of high tide, the sluice gates are raised into the footbridge structure above, allowing ships and boats to pass through the barrage.

For the rest of the day the sluice gates are closed and passing river traffic must use the lock alongside the barrage. The sluice gates ensure that the water level between Richmond Lock and Teddington Lock is maintained at or above half-tide level.  For brief periods of time the weirs can be manipulated to produce truly thunderous white water effects.

This footbridge is open for general public use between 0630 to 1930 in the winter months and 0630 to 2130 in the summer months. If you required the bridge to be closed while filming took place then this could be arranged. This is the only bridge over the river Thames where a complete closure to the general public can be arranged with minimum cost implications.

The footbridge offers a tranquil setting for any type of scenic shots of the river Thames in this beautiful area.

It should be noted that permission to film on or by the Thames requires a filming licence issued by the PLA Corporate Affairs team.

If you're interested in using Richmond Footbridge, the Lock and Weir (or part of it) as a location, for more information or to arrange a site visit, please contact Jim Deeney (Richmond Lock Foreman) on 020 8940 0634.

Or view our image gallery Filming at Richmond Lock and Weir