Our website uses cookies so that we can provide a better service. Continue to use the site as normal if you're happy with this, or find out how to manage cookies.
X
You are here
>A Brief History of the PLA

A Brief History of the PLA 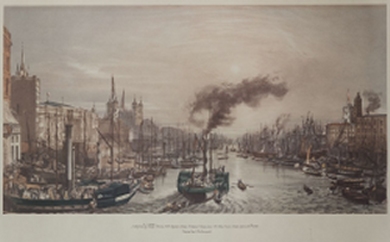 The Port of London Authority (PLA) was created to bring order to the chaos and congestion that prevailed on the Thames as rival wharfs, docks and river users battled for business in the late 1800s.

The only form of British international transport and trade at the time was sea-based and a successful Port was essential to a nation's success. (Flight was in its infancy - in 1909 Louis Bleriot was setting records as the first pilot to cross the English Channel.)

Structural improvements were seen to be essential to maintain and improve the Port's position against its leading European rivals.

After years of hot debate, the Bill that led to the creation of the PLA was introduced by David Lloyd George in April 1908; the challenge of guiding it through the House fell to his successor, Winston Churchill. The Bill received Royal Assent as the Port of London Act, 1908, in December 1908.

The following March the PLA came into being - taking on: 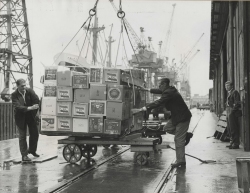 In the years immediately after its formation, the PLA oversaw investment and modernisation of the docks, deepening of the river and brought co-ordination - and a new sense of identity - to a busy, successful Port.

Subsequently the Port played its part in the nation's efforts through two World Wars - for which stories of heroism abound - and the rebuilding that followed.

Trade through the Port, particularly the enclosed docks, reached its peak in 1964 at 61 million tons (55 million metric tonnes).

Very rapidly after that changes in cargo handling technology and increasing ship sizes brought to an end the era of the up river enclosed docks (St Katharines to the Royal Docks); they progressively closed between 1967 and 1981 as trade moved downriver.

Today, the Port handles over 50 million tonnes of cargo, with the larger operations concentrated around and down river of the Dartford river crossing.

The modern PLA is no longer involved in cargo handling; its last such operation - Tilbury Docks - was privatised in 1992.

Today the PLA employs 360 people and continues in its core role - helping people make the most of the river safely - whether it is for deep-sea trade, river borne freight within London, commuting, sailing or rowing. Its operations over 95 miles of river from Teddington Lock to the North Sea include:

The PLA is a self-financing public trust - it provides its essential safety services through charges on river users and without tax payer support.