Our website uses cookies so that we can provide a better service. Continue to use the site as normal if you're happy with this, or find out how to manage cookies.
X
You are here
> Media
> Galleries

The PLA and Port of London have changed dramatically over the past 100 years. This selection of galleries and images documents our journey.

With the outbreak of the war on 2nd September 1939 the Royal Navy established guard ships, batteries were manned on both banks of the lower river and in the middle of the reaches in the dock and, in industrial areas, barrage balloons were inflated. Everyone was aware that at some point the Thames would become a target. Passive defences in the Port were ready with stringent security measures in place enforced by the Authority’s own police at the docks and by the Thames Division of the Metropolitan Police in the river.

View more
The Queen at the Royal Albert Dock London

On 12 May 1959 Her Majesty the Queen visited the Port of London Authority as the organisation celebrated its 50th anniversary.

The Port of London Authority marks the 75th anniversary of VE Day. These historic photos from the PLA archive are housed the Museum of London Docklands. 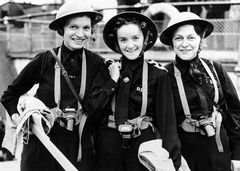 Search through the Port of London Authority archive selection.