Our website uses cookies so that we can provide a better service. Continue to use the site as normal if you're happy with this, or find out how to manage cookies.
X
You are here
> Environment
> Rescued 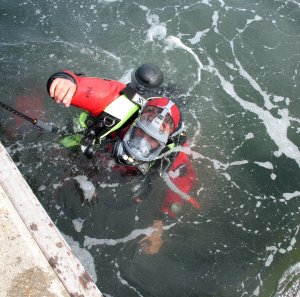 The wreck was located about 15km (28nm) north-east of Whitstable in a shallower area of Princes Channel that lies between the sand banks of Kentish Flats and Girdler, on the southern edge of Shingles. Despite poor visibility and strong currents, the site was immediately mapped and measured.

Two 'airlifts' (blowers) were used to remove sediment from around the wreck so that objects could be recovered. Small finds were sealed in containers underwater and lifted on land in a cage; the ship sections were raised and transported to Portsmouth, to be kept submerged in Horsea Lake, where they are now lying in a shallow brackish-water lake. The objects were later stripped of sediment, drawn and photographed at the site and are currently undergoing conservation treatment at UCL, Institute of Archaeology and English Heritage at Fort Cumberland, Portsmouth. Rescued objects include four cannon, 40 iron bars, lead ingots, an anchor, Spanish olive jars, leather shoes and rope.