Our website uses cookies so that we can provide a better service. Continue to use the site as normal if you're happy with this, or find out how to manage cookies.
X
You are here
> Environment
> Reporting

The five-year research programme, which started in early 2008, includes reporting of the findings through publication of papers, research reports together with lectures, conferences and seminars.

In May 2009, a seminar - The Tudor Ports of London: An archaeological investigation – was held to mark the century of the PLA and the 450th anniversary of the Elizabethan Port Reforms that established the shape of workings London's harbour until the Nineteenth Century.  The findings of the Gresham Ship project were the highlight of the event, which also covered an archaeological focus on the harbour, its building, its shipping and the evidence for traffic trade.

For more information on the seminar and associated lecture programme visit the website (opens in a new window). 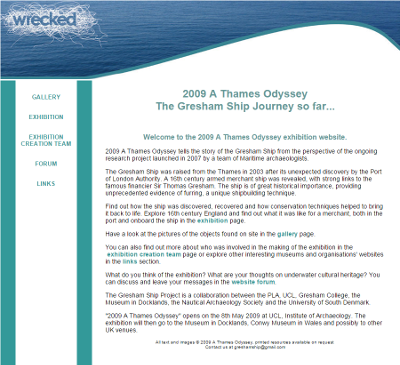 An exhibition about the vessel, "2009 A Thames Odyssey" is being shown at UCL, Institute of Archaeology; the Museum of London Docklands and Conwy Museum in Wales. Further information is available here (opens in a new window).