Our website uses cookies so that we can provide a better service. Continue to use the site as normal if you're happy with this, or find out how to manage cookies.
X
You are here
> Media
> News Releases
> Cargo up at Port of London

Cargo up at Port of London 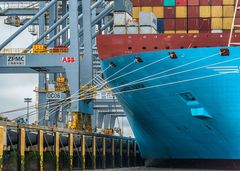 Activity at port terminals on the River Thames is up - with cargo trade growing by 1.3 million tonnes (3%) in 2014. Total Port of London trade in the year was 44.5 million tonnes.

“Trade is now growing strongly on the busiest and most diverse river in the UK. This growth has been across all major cargo types – oil, containers and building materials.

The growth reflects key investment decisions by port operators, as well as the wider economic upturn. This investment includes the continued development of the London Gateway container port; strong investment at the Port of Tilbury including at their London Distribution Park; FM Conway reopening Imperial Wharf at Gravesend for bitumen; and Stolt Neilsen also expanding its Thames operations.”

· the Port of London comprises over 70 independently owned and operated terminals and port facilities at different locations on the Thames. These handle a wide range of cargoes.
· the Port of London Authority (PLA) is responsible for navigational, safety and related matters on 95 miles of the tidal Thames from the sea to Teddington in west London. The PLA provides navigational, port control / Vessel Traffic Services, safety, pilot, diving and other services for users of the Thames
· photos of shipping and port activity in the Port of London available on request from martin.garside@pla.co.uk