Our website uses cookies so that we can provide a better service. Continue to use the site as normal if you're happy with this, or find out how to manage cookies.
X
You are here
> Media
> News Releases
> Works to remove West Street Pier

Work to dismantle and remove the old West Street Pier in Gravesend is well underway.

The pier was used for a number of years by passengers of the Gravesend-Tilbury ferry. But in 2012 the ferry service moved to the renovated Town Pier.

The old West Street pier has therefore not been used for a number of years and is now in very poor repair. The structure was further damaged in winter storms last year.

The Port of London Authority (PLA) has recently taken ownership of the old pier and begun work to remove the structure. This includes the floating pontoon 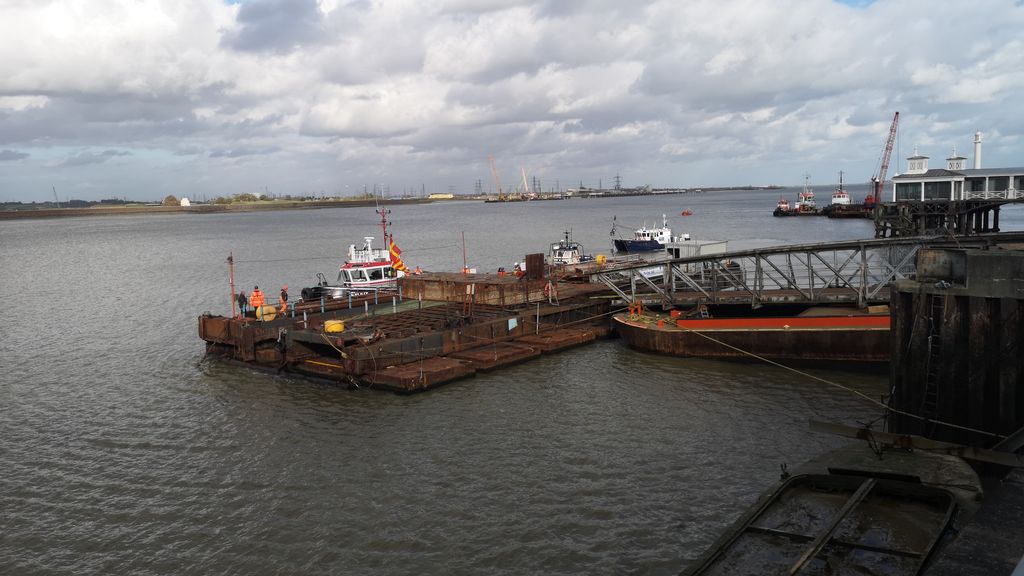 and the ‘brow’ (the bridge or ‘gangway’) which connects the pontoon to land.

Staff from the PLA and from specialist marine contractors began to disconnect the structure from the shore and other preparatory tasks in late September.

The key task of completely removing the main sections of the pontoon and brow by river began on October 8. The PLA hope to complete the work by Friday 11 October.

“The old pontoon and brow have certainly seen better days. The structure is beyond repair and no longer safe. Also, as the floating structure is very corroded the local residents have recently had to endure very loud ‘banging’ noises at certain states of the tide and weather.

“There will of course be some noise and disturbance during the current removal activity – but we have been working hard with our contractors to minimise this”.

“It is good news that the PLA has taken ownership of, and responsibility for, West Street Pier. We recognise the current structure is beyond repair and are pleased swift action is being taken to clear the site before it becomes a danger to river traffic. We look forward to working with the authority as it works on its proposals for a replacement pier.”