Our website uses cookies so that we can provide a better service. Continue to use the site as normal if you're happy with this, or find out how to manage cookies.
X
You are here
> Media
> News Releases
> New safety campaign targets vessel breakdowns as Maritime Safety Week starts

As Maritime Safety Week kicks off, the Port of London Authority (PLA) has called on people taking their boats on the Thames to step up vigilance and avoid the ‘side effects’ of neglect, in a bid radically to reduce the number of breakdowns on the river. 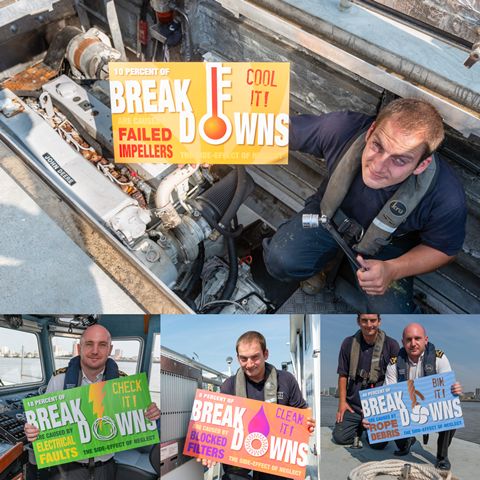 Over the two years 2016/2017, 120 breakdowns were reported on the Thames in central London. Now the PLA has launched a campaign comprising four simple animations, to reach vessel skippers and owners around a core message of what to look out for to ensure their vessels are in the best condition possible, before taking to the Thames.

The PLA’s research shows that 40% of the breakdowns are caused by debris in the water – mainly ropes; 18% are caused by electrical faults (wiring and switch faults); 10% by overheating (largely failed water pumps); and 8% by fuel problems (for example blocked filters and contamination). Breakdowns can cause damage to vessels and piers, put crew and passengers at risk, increase congestion and result in a substantial maintenance bill for the boat owners.

The PLA safety campaign, which will be promoted via social media, is focused on these four areas with no-nonsense, simple messages, encouraging boat owners to ‘bin it’, ‘check it’, ‘cool it’, and ‘clean it’.

PLA chief harbour master, Bob Baker, explains: “Our role is to keep people on the river safe and promote the use of the Thames for trade and travel. Part of this is ensuring smooth journeys for vessels on the water. Through this campaign we are aiming to alert anyone who can have an impact on improving preventative maintenance and taking action on debris in the river to the significant negative impact that neglect can have on the operation of all types of boats.

“Maritime Safety Week is the ideal time to kick off this latest safety campaign as making sure your boat is properly prepared for a trip is one of the fundamentals for safe navigation. It does though have to stand alongside other essentials, including passage planning and keeping a good look out once underway.”

The most negative influence on breakdowns – 40% caused by debris – mainly comprises ropes used for all sorts of marine activities. The PLA’s call to ‘bin it’ is also supported by the Cleaner Thames campaign, which aims to reduce the volumes of rubbish, principally plastics, in the river.

For more information on the campaign, visit the PLA website: https://www.pla.co.uk/Safety/Breakdowns. The dedicated recreational river users website also provides useful information for those planning trips on the Thames: www.boatingonthethames.co.uk.