Our website uses cookies so that we can provide a better service. Continue to use the site as normal if you're happy with this, or find out how to manage cookies.
X
You are here
>Keeping things sheep-shape on the Thames

Keeping things sheep-shape on the Thames

Ken Baxter is a shepherd on tenanted land we own bordering the tidal Thames foreshore. Here he tells Tidal Thames News about working the land and the suicidal tendencies of his sheep...

The tidal Thames is famously a river of contrasts. In its waters and along its banks, a wealth of industrial, recreational and commercial activity goes on. But head east by boat, a little way past Tilbury’s busy terminals, and add farming to the mix. Bordering the south side of the river in Cliffe, Kent, is a patch of marshland that’s both a haven for wildlife and the star of several Hollywood films.
Facing London Gateway’s massive quay cranes, which peer down from the opposite side of the river like gargantuan robot beasts, these 600 acres of lush fields also happen to graze about 1,000 sheep. They are tended by hardworking Ken Baxter, on behalf of land tenants GJ Duncanson Ltd. Neighbouring land is used to feed cows and horses, among other things, but meticulous Ken here breeds higher welfare lambs. 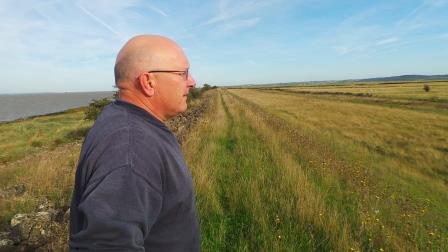 Ably assisted by wife Carol and their three impressively drilled border collies Floss, Jock and Bob, the Baxters have carved out an enviable life for themselves that's far removed from the hustle and bustle you’ll find a few miles upriver.
“There aren't a lot of people around these days who can do this sort of thing”, Ken insists. “I got into this life after being an engineer for many years. I got sick of being told ‘you can’t do this’ and ‘you can’t do that’. "Luckily, I was able to start working here as my parents worked this land and I grew up on it, so the job passed on to me.”
Cliffe Marshes are well-known as a key location in Dickens’ Great Expectations, where Pip meets his destiny in the form of escaped convict Magwitch. They also, unlikely as it seems, doubled as war-torn Vietnam in the 1987 film, Full Metal Jacket.
“They planted palm trees and drove tanks through the fields,” Ken reveals. “It was quite surreal.”
Straight-talking Ken keeps a close watch on his flock, whose yearly crop of lambs are, after all, his livelihood. His working day invariably starts at sunrise and knocking off time isn’t so much when the whistle blows as when Ken’s satisfied he’s done enough for the day.

But the long hours and lack of sleep don’t bother him in the slightest – working the land makes him feel like the luckiest guy alive. However, living in a quaint farmhouse accessed via uneven roads, on exposed marshland that gets harsh winters and few visitors, he admits it’s not an easy life.

He says: “It’s difficult to make a good living out of this, but we both love it and don’t consider it a job at all. I couldn't do it without Carol's company and help, but it's a way of life to us, a way of life that can be unpredictable. Sometimes the weather’s against you and it gets incredibly cold on the marshes. But I feel totally responsible for myself and use my common sense when in doubt about anything. If something doesn’t work it doesn’t work, it’s as simple as that.” 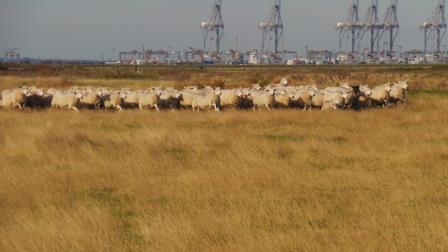 Managing livestock is no picnic as Ken himself will readily admit, it hasn't made him rich and his sheep are never that far from doing themselves a serious disservice. “Shepherds have a saying”, he says. “'All sheep are born with a mischievous desire to find a new way of dying’. They fall over onto their backs and can’t get up. And if I don't get there in time the gas inside them builds up and they could die. They also fall into ditches, get tangled up in fencing or plunge into the water; just about anything you can imagine – they’ll do it.”
Ken keeps the animals separated in different fields according to age. The older a ewe gets the less productive she becomes in terms of breeding, so the flock's numbers are thinned out according to their productivity. They have to be counted regularly and, of course, a close eye must be kept on their general health and welfare. By the time lambing season comes round the real work begins. Ken and Carol get very little sleep during this six or seven-week period from the end of March to mid May. Each ewe is tagged and the Baxters will roughly know when each expectant member of the flock should deliver the goods, as it were. Long days and nights pass as the meticulous waiting game continues.
“It all happens in the open”, Ken reveals. “It’s as natural a process as we can possibly make it, which is so different to intensive farming. A ewe delivers and we check to see she’s got a good mothering ability. We rate that and if she doesn’t make the grade we have to lose her from the flock. That ability is vital. “Then, later we take the lambs and sell them at a market in Ashford.”
It’s obviously an exhausting way of life. And although he takes great care over his flock, he’s far from sentimental about the lambing process.
He says: “Look around you, who wouldn’t want a life like this? Of course, some people get a bit misty eyed about baby lambs but I don’t. I depend on them for income and always feel sure that we’ve done our best for them.” 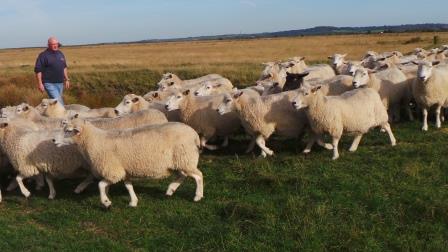 Ken also does his best for the wide variety of birds that visit the marshes year in year out. These include lapwings, marsh harriers, skylarks, meadow pipits and little grebes. They feast on the countless anthills and insect-rich land that Ken manages. He even carried out a recent bird survey and was pleased to note a veritable profusion of life.
Standing where the pasture land meets the river, he takes in the 360-degree, postcard-pretty view: “I like and enjoy the river Thames. My wife and me love going to events such as the Thames Sailing Barge Match. It’s fair to say that activity on the river has picked up recently and it seems to be getting busier. It’s definitely cleaner than it was.”
As well as his shepherding duties, Ken undertakes important conservation work that’s monitored by various government agencies, including the North Kent Marshes ESA (Tier 1) scheme. That involves grassland management, ditch maintenance, gate and fence replacement – as well as grazing management.
Ken says: “I don’t like to think about what will happen when I can’t do this anymore. That’s how much I enjoy it. But as long as I’m able, I’ll take care of things and enjoy every single second of it.”