Our website uses cookies so that we can provide a better service. Continue to use the site as normal if you're happy with this, or find out how to manage cookies.
X
You are here
> Media
> News Releases
> First call on the Thames for world’s largest short sea ro/ro freighter 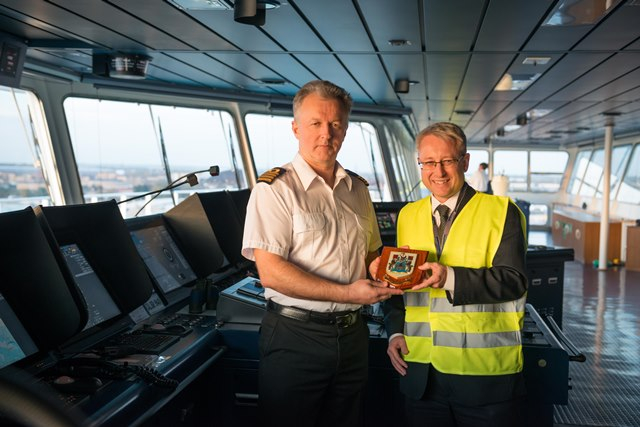 The largest short sea roll-on/roll-off freight vessel in the world, CLdN’s Celine called on the Thames for the first time this week.

Celine is the first ship in a series of eight that CLdN is adding to its fleet; she has just arrived in Europe from builders Hyundai Heavy Industries in South Korea. CLdN is deploying Celine on its weekly itinerary, calling at Purfleet on the Thames, Rotterdam, Zeebrugge and Dublin.

CLdN has described the new ships, which offer 8,000 lane metres of cargo capacity as a ‘game changing’ investment. Their innovative design offers flexible deck configuration, enabling them to cater for a mix of trailers, containers, high and heavy cargoes, cars, vans and trucks. The company’s C.Ro Ports division is simultaneously expanding its terminals to cater for the larger vessels, with expansion planned for their Purfleet base on the Thames.

PLA director of corporate affairs and strategy, Alistair Gale, welcomed the captain of Celine, Sergei Loik, to London, presenting a Port of London plaque to mark the vessel’s first call on the Thames.