Our website uses cookies so that we can provide a better service. Continue to use the site as normal if you're happy with this, or find out how to manage cookies.
X
You are here
> Media
> News Releases
> Explorer Challenges London: 'Do the right thing' and look after the Thames

Explorer Challenges London: 'Do the right thing' and look after the Thames 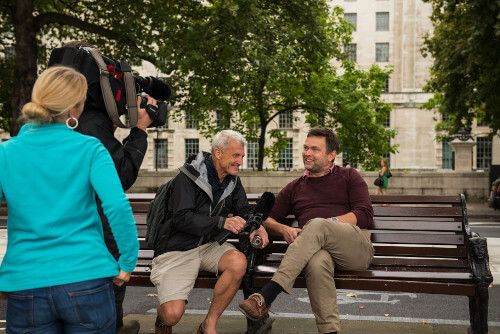 International explorer Paul Rose and campaign partners have joined environment charity Thames21’s foreshore clean up today (Wednesday, 30 September) and called on Londoners to ‘do the right’ thing and make sure their rubbish goes in the bin, not in the River Thames.

Paul kicked off the Port of London Authority (PLA)-led campaign at a clear-up on the Isle of Dogs’ foreshore, overlooking historic Greenwich Royal Naval College. The campaign aims to raise awareness of the harm that rubbish in the Thames is doing to wildlife and why it’s important to stop it getting there in the first place.

“I love the Thames,” said Paul. “I grew up near it in Rainham, so it was part of my everyday life for many years. Now I’ve come back to help raise awareness of the harm rubbish does in the river and the simple things you need to do to stop it getting there in the first place.

“The message to people is simple: do the right thing. Bag up your rubbish and make sure it’s disposed of properly. If you don’t, the wind will snatch it and blow it along until it finds the water, stops dead and stays there. It only comes back out again when people like the PLA, Thames21 and their volunteers come along to take it, bag it, and recycle it. If it’s not recovered it ends up in the stomachs of seals, fish and other marine life in the river.” 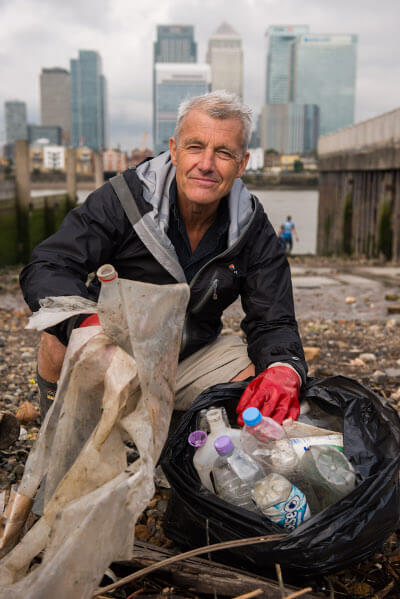 Dr Dave Morritt, reader in Aquatic Ecology and head of school, School of Biological Sciences, Royal Holloway, University of London, oversaw a recent study of River Thames fish and says the impact of litter is clear:

“The fish are eating plastics introduced into their environment by human activity. Two species of fish, flounder (Platichthys flesus) and smelt (Osmerus eperlanus) from Erith and Isle of Sheppey were found with plastic fibres in their guts: up to 75% of sampled flounder had plastic fibres in the gut.”

“We’ve spent the whole of September celebrating the Thames, with events bringing over two million people to the river and its banks. So the message is simple. We’ve got eleven months until the next festival – in that time, let’s do all we can to stop the flood of rubbish going into the Thames.”

Every year the PLA recovers over 400 tonnes of rubbish from the river Thames. Some of it is heavy wood which is hazardous to ships; the vast majority is plastic of all kinds, mostly bottles, but also spoons, cartons and Q Tips.

“The river is like a great big rubbish magnet,” commented PLA chief executive, Robin Mortimer. “If you’re close to the river and don’t bin your coffee cup, water bottle or sandwich wrapper properly, there’s only one place it’s going to end up. And if we are not able to recover those plastics, they’ll ultimately end up in the scores of birds, fish and seals that the river is home to.”

Rubbish in the world’s rivers is feeding a global problem with large volumes of plastic floating in some parts of the ocean. Scientists say there are five huge “garbage patches”, at the centre of circulating ocean currents called gyres, where each square kilometer of surface water holds almost 600,000 pieces of plastic debris. Sea birds found with plastics in their gut include albatrosses, gulls, petrels, and penguins. 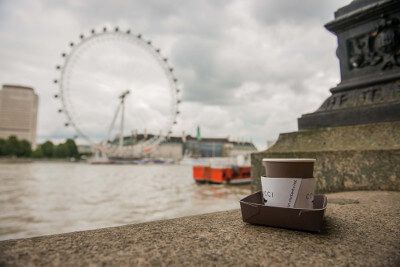 Debbie Leach, CEO of environment charity Thames21 says the campaign is essential to stop a seemingly unstoppable tide of rubbish:

“Our thousands of volunteers go to the Thames foreshore and do a fantastic clear up - but when we go back a week later, the rubbish has gathered in the river once more - with countless bottles and bags to be cleared all over again. The only way to make progress is to stop the rubbish at source: when it leaves people’s hands it needs to go in the right place, the bin.”

The campaign is backed by groups including Thames21, Totally Thames, the Environment Agency, Thames Tideway Tunnel, London Wildlife Trust, Marine Conservation Society and the RSPB. It features four posters and a film in which Paul Rose explains the scale of the problem and how people can ‘Do the Right Thing’.

The campaign launch comes as Tideway gears up to start work on the Thames Tideway Tunnel, which will help tackle the 39 million tonnes of raw sewage that overflow into the River Thames in a typical year.

“Forty years ago the Thames was biologically dead,” said Tideway chief executive Andy Mitchell. “We’ve now got 125 species of fish living in the river but, while good progress has been made, it’s a sad fact that millions of tonnes of sewage still pours into the Thames each year - putting this wildlife at risk. This is simply unacceptable in this day and age. Our goal is to help clean up the River Thames, but now we’re calling on Londoners to do their bit too, so we all have a river to be truly proud of.”

The posters can be downloaded at: http://www.pla.co.uk/cleaner-thames
The film can be seen at: https://www.youtube.com/watch?v=9bsLmgzpHQE

About the Thames environment

About the Thames Tideway Tunnel