Our website uses cookies so that we can provide a better service. Continue to use the site as normal if you're happy with this, or find out how to manage cookies.
X
You are here
> Events
> Eights Head of the River Race

Eights Head of the River Race 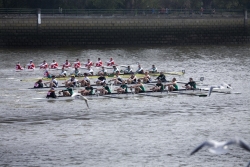 The Head of the River Race (HORR) is a processional race for eights rowed over the 4.25 mile championship course from Mortlake to Putney i.e. the Oxford-Cambridge Boat Race course in reverse. It involves a maximum of 420 crews and involves some 3,750 competitors, believed to be a record number for a single continuous rowing event.

The Race was devised by the legendary Steve Fairbairn, the Cambridge and Tideway oarsman, as a means of getting crews aiming for the Summer regatta season to do long rows during the Winter. 21 crews took part in the first race, which was held in 1926.

There was no race in 1937 (there was no suitable tide on a Saturday and no competitive sport took place on Sundays in those days) and none from 1940-45 inclusive. The event was restarted in 1946 and has taken place annually ever since. 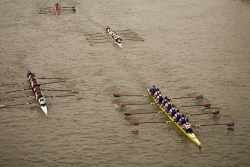 From 1979 onwards, due to the sheer volume of competitors and for reasons of safety on a relatively small area of river and riverside, the HORR Committee had  to impose a limit of 420 crews, which still exists today. The race is usually oversubscribed.

The winning crew from the previous year starts first, followed at 10-second intervals by the other crews in the previous year's finishing order. These are followed by new entries in alphabetical order. The race takes approximately 1.5 hours from the first crew starting to the last crew finishing. The record time of 16m 37 secs for the course was set by the GB National Squad in 1989.

Some 50-60 overseas crews take part every year. The majority come from Germany, but over the years entries have also been received from Australia, Austria, Belgium, Denmark, France, Italy, the Netherlands, Spain, Sweden, Switzerland and Yugoslavia.

For more information please visit the Head of the River Race website (opens in a new window).